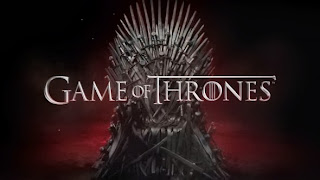 I love the mini-series Game of Thrones, based on the book series A Song of Ice and Fire by George R. R. Martin. I've watched every episode of the show with my girlfriend, and we've been engrossed in the story as it progresses.

However, after this last episode (the finale of season three), there is just one major criticism I have to make: I am getting sick and tired of the "white liberator" or "white savior" storyline that is escalating, carried on by Daenerys Targaryen. Yes, I know this is just a work of fiction, and an entertainment production, but hear me out: 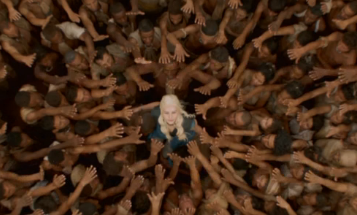 Although there has been a lead-up throughout season three, this final episode shows us the most blatant images of Daenerys gloriously freeing slaves in Essos—the continent east of Westeros that (purely by coincidence, surely) is filled with darker-skinned people than Westeros. These images make up the very last moments of the season, in fact, as a mass of dark-skinned slaves begins chanting "mother" to Daenerys, their apparent liberator, and lifts her skyward while touching her in exultation. Tell me—what else does awestruck adoration, symbolic parenthood, and the touching of a person in a crowd allude to if not to Jesus? Like it or not, what we're dealing with here is a highly unfortunate white savior image.

I'll tell you why this is unfortunate. Like I said, G. R. R. Martin's books are just stories, and the TV series is just entertainment. However, stories and entertainment contribute to the beliefs and prejudices present in a society, and I think Danys' storyline feeds some prejudicial ideas that continue to influence Americans, Europeans, and others.

The main idea is, in essence, that Europeans and Euroamericans ("white people") have played the critical roles throughout history in abolishing slavery and bringing the concept of liberty to the world. Most Europeans and Americans probably don't think about this idea much explicitly, but they tend to believe it implicitly. After all, don't all Americans know that Lincoln "freed the slaves"? Don't the British know their navy "stopped the Atlantic slave trade"? Don't the French know that their government "abolished slavery" in its African colonies? The list goes on, but I think that—by and large—many people do "know" these things.

I used a lot of scare quotes in the previous paragraph for one reason: The "facts" about abolition we may think we know are often gross mischaracterizations of history. Abraham Lincoln did not, in fact, free the millions of people enslaved in the United States during the time of Civil War: Although the Emancipation Proclamation he signed and the Thirteenth Amendment that followed did serve as the legal basis, those people escaped from slavery only through the force of Union military occupation of the South, or through their own ingenuity in fleeing before that presence arrived.

One might call this clarification unimportant, but the sad part is really what gets left out of the story: Legal emancipation did not truly free most of the former slaves in the United States, or their immediate descendants. Instead, those with wealth and power created new means of subjugating and exploiting these people, bringing them into modified forms of coerced labor and political marginalization. Powerful white Americans were mostly either the designers of these systems, or complicit in allowing them to go unchallenged, as when Northern presidents Grant and Hayes withdrew federal troops from the South as part of the Great Betrayal of 1877, paving the way for the imposition of the Jim Crow laws.

Whenever people in power (regardless of color) abolish some form of slavery or another, they most often create new means of subjugating and exploiting the less powerful. This also applies to the stories from Britain and France, states that purportedly "abolished" slavery, only to subsequently engineer colonial and neo-colonial systems in Africa (and elsewhere) that to this day have left Africans and their governments less powerful, less wealthy, and less valued on the world stage.

Now, how does all of this relate to Game of Thrones, again? Well, Europeans, white Americans, and others have historically drawn comfort from images of themselves as liberators and saviors—people who have, in the face of setbacks and difficulties, fought for the good of everyone. There's Abraham Lincoln, right? Never mind that he endorsed slavery's legality and believed in Africans' inferiority for the vast majority of his life. (See here) There was William Wilberforce, too—the British statesman who got a movie 200 years after he helped his country outlaw the slave trade, while no movie I know of attempts to encompass the utter horror of what over 200 years of British slave trading wrought upon millions of lives.

While assuaging potential guilty feelings, the celebration of such heroes also feeds continuing trains of thought like those related to the "white man's burden"—the notion that Europeans and their cultural compatriots have an obligation to spread the "civilization" and "enlightenment" of their practices and ideas to make the world a better place. Daenerys exhibited this sort of ethnocentrism rather well during season one of Game of Thrones, as she attempted on occasion to "civilize" the Dothraki, crudely described as a "cross between the Mongols and some of the Native American tribes."

I don't know how familiar George R. R. Martin may be with the "white man's burden" or colonial history in general, but it's highly unfortunate that his Daenerys storyline (at least as portrayed in the HBO series) seems to slide so well into the same sorts of prejudices that have comforted Europeans and white Americans for centuries. Today, Europeans and Americans perpetually gloss over the histories of exploitation that implicate their predecessors, opting instead to promote self-congratulatory (and often very false) stories of how white people improved the human condition. Again, let's look at that picture with Daenerys: 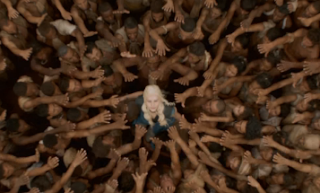 Are you ok with that image? It actually makes me very uncomfortable, if not disgusted, and I hope by now you can understand why. Let me know what you think.

[Note: This blogger pointed out Dany's ethnocentrism weeks ago while this one argued in response while also stating that "the representation of non-Westerosi cultures and races is one of the most problematic elements of the series." Both are worth a read, and I think they both make legitimate points.]
Africa Europe history media review thought United States
Reactions: Location: Ketchikan, Alaska